In recognition of the recent 375th anniversary of the construction of the Mother Brook Canal, Town Meeting allocated funding for survey and documentation of the canal and related buildings and structures in East Dedham, and to identify districts, properties and sites eligible for listing in the National Register of Historic Places.

The Town of Dedham’s Mother Brook corridor includes a significant collection of surviving historic mill buildings, industrial infrastructure, residences (including company-built housing), municipal properties, and commercial buildings that form the core of the East Dedham neighborhood. The opportunity for water-powered mill sites here was recognized exceptionally early and put into motion by the excavation of a canal in 1639-40 that connected the Charles River to the headwaters of the then-named East Brook (later Mill Creek), and created the initial flow of water to support mills as the modified waterway descended from the Charles to its confluence with the Neponset River in what is now the Readville neighborhood of Boston. The first mill went into operation ca. 1641 near the present-day Bussey Street, and in all, four mill privileges were developed in Dedham as one of the nation’s earliest industrial corridors attracted manufacturing activities through the early 20th century, driving the growth and development of East Dedham. In the hope of receiving National Register recognition for this area, the Mother Brook community Group of East Dedham sought funding from the Town to undertake the survey and documentation phase foundational to the National Register process.

The project area includes significant properties, buildings, structures, and areas surrounding the waterway from the canal entrance on the Charles River to the town line with Readville in Boston.

The purpose of this project will be to undertake an intensive-level survey of cultural and architectural resources along the Mother Brook Corridor in the East Dedham neighborhood of the Town of Dedham. This project will be structured to provide professional cultural and architectural resource survey expertise to the community. Specific project goals are as follows:

The Dedham Historical Commission established a Steering Committee in early 2018 to include the following representatives:

The Town Economic Development Director and Town Planner are working with the Committee.

In September, 2018, the Town hired Stacey Vairo and Lucas Karmazinas of Heritage Consultants, Newington, Connecticut, to conduct the survey project. Completion is expected by the fall of 2019. When the survey and documentation phase is complete, the Massachusetts Historical Commission will determine if the recommended National Register District is eligible for listing. Phase Two, preparation of the National Register nomination, will require multiple public meetings. 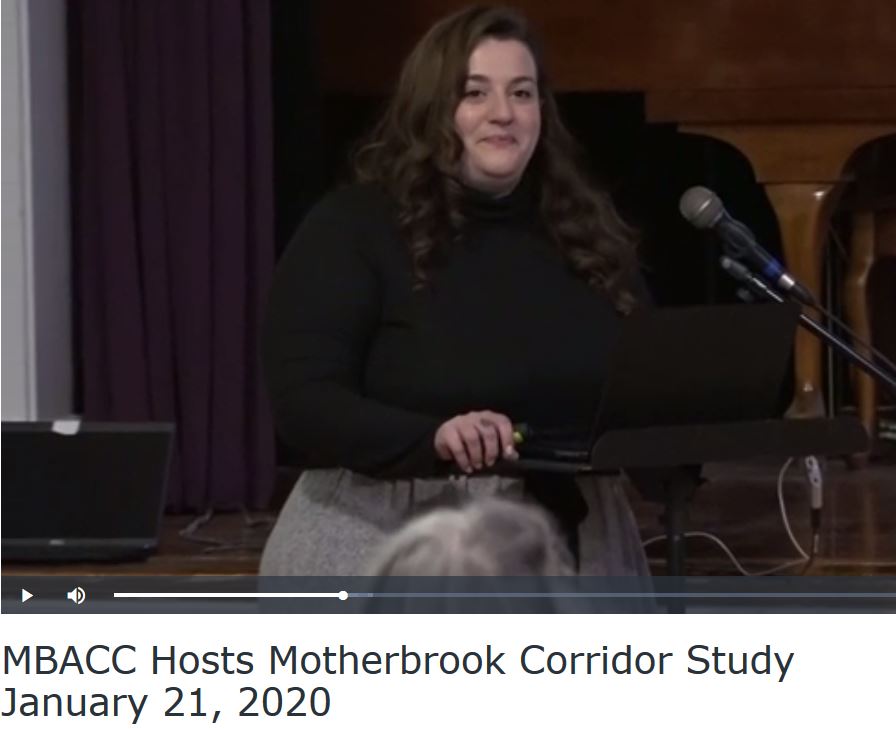 January 21, 2020 - Findings of the survey of historical assets were shared with an audience of nearly 200 residents at the Mother Brook Arts & Community Center.

April 10, 2019 - An update on the project was given at the annual meeting of the Mother Brook Community Group.