When police departments respond to domestic violence calls, the victim is referred to social service agencies and the local courts but they must make those calls themselves at a time when their emotions and thoughts are all over the place. By the time a victim reaches out to those agencies, the perpetrator has usually already apologized, promised it won’t happen again or threatened the victim in some way to manipulate them into not moving forward with assistance. Statistics show that for most victims of domestic violence it can take multiple incidents of violence and as many attempts to reach out to a service provider for assistance before they are successful.

For years the Quincy and Randolph Police have been dedicated to the issues of domestic violence, so it was only natural when funding should become available through VOWA (Violence Against Women Act) that the two police departments and dove would enter into a relationship offering a new type of outreach to those who were involved in domestic violence incidents that the police responded to. DOVE’s CDVA reaches out to all those who are identified in police reports to offer safety planning, crisis intervention, support, information, assistance and resources. In 2012, DOVE added the Holbrook Police Department to the list of communities it serves in this capacity.

Since the inception of this program in 2009, DOVE’s CDVA has reached out by phone or by letter to the 4574 people who have been involved in the incidents of domestic violence the police have responded to, resulting in hundreds of successful conversations informing those involved with important information and resources they normally would not have received until they had to wait to become involved with some other social service agency to refer them. The safety planning done during those important conversations has not only made those people safer, it has saved and changed lives.

Statistics help us to see that domestic violence in prevalent in many homes across the nation. The Dedham Police Department takes this very seriously and takes an attentive and unique approach to try to assist those who are affected to get help. The Department continues to be a leader in providing safety and information to victims of domestic violence. As a pro-active department, the DPD is committed to responding to those calls with caution, care and empathy and understands that not only are the victims affected but the children as well. Statistics also reveal that children who witness violence are significantly more likely to suffer emotional trauma which if not addressed can lead to suffering emotional trauma, addictions, emotional disorders, anxiety and decreased self esteem.

Continuing with a long time relationship with DOVE Program, the Civilian Domestic Violence Advocate from DOVE reaches out to all victims named in domestic violence reports to offer support, information on rights, navigation through the legal system and explains available options. This Advocate also assists in the restraining order process at Dedham District Court every Monday.

There are at least 17 signs of an abusive personality with only 4 of them being physical. Please contact the Civilian Domestic Violence Advocate at 857-939-3058 if you have questions or need assistance. 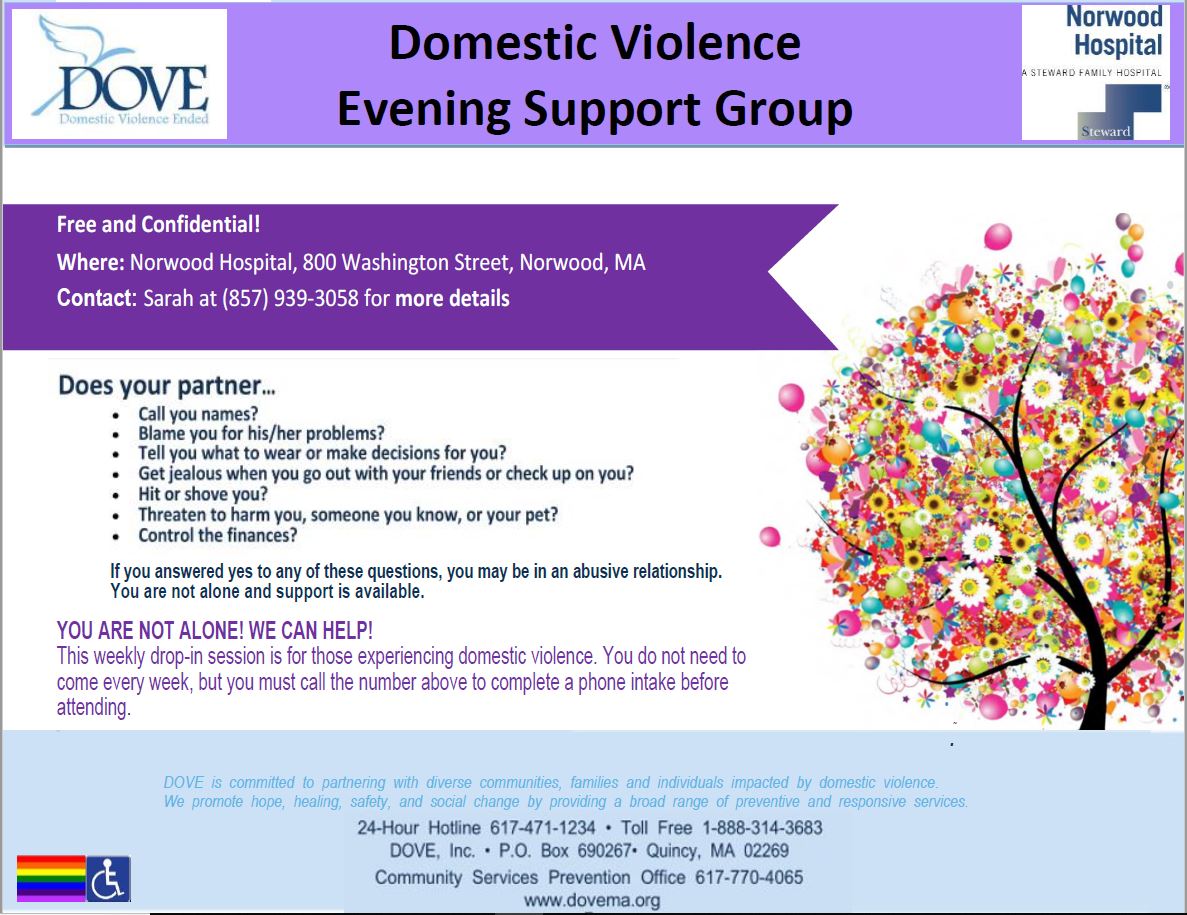