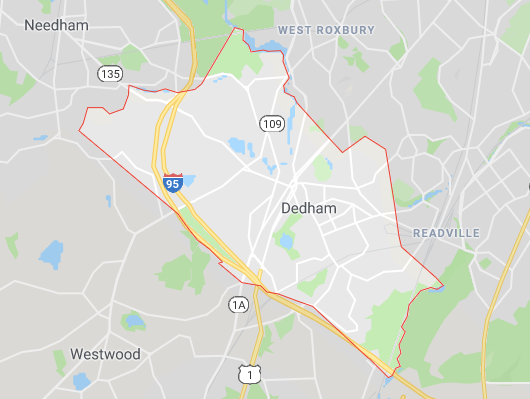 Dedham is located on Boston’s southwest border, just 10 miles from the Commonwealth’s capital. On the northwest, Dedham is bordered by Needham, on the southwest by Westwood, and on the southeast by Canton. Dedham has easy access to I-90 (Mass. Pike), I-93, and Route 109. Route 1 runs through Dedham. Logan International Airport is located in nearby Boston.

While our community is located in an urban area, it also contains significant natural and recreational resources as well as suburban neighborhoods. Dedham consists of residential properties as well as a variety of commercial, business and retail districts.

The Charles River runs through Dedham and the first man-made canal in North America, Mother Brook, was created in Dedham in 1639, linking the Charles River to the Neponset River.